LISTEN TO THE INTERVIEW HERE

On todays episode I talk with Director Thomas Morgan. Thomas is currently attending the Sundance and Slamdance Film Festival for his new Documentary, Waiting for Mamu. 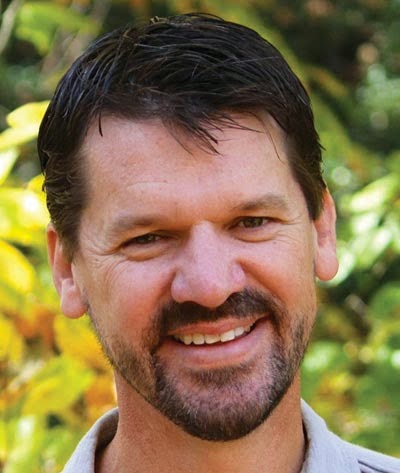 I recently screened Waiting for Mamu as part of the Slamdance Film Festival. Waiting for Mamu is a beautiful film with a powerful message. Waiting for Mamu is a powerful story of a woman named Pushpa Basnet from Kathmandu, Nepal. In Nepal, when a parent is sentenced to prison, their children will be sent to prison with them if they don't have another guardian to take care of them. Pushpa has taken it upon herself to save these children. Thomas takes us along Pushpa's journey as she rescues these children from prison and helps raise and educate their children so that they can have a better quality of life then what their parents have had. 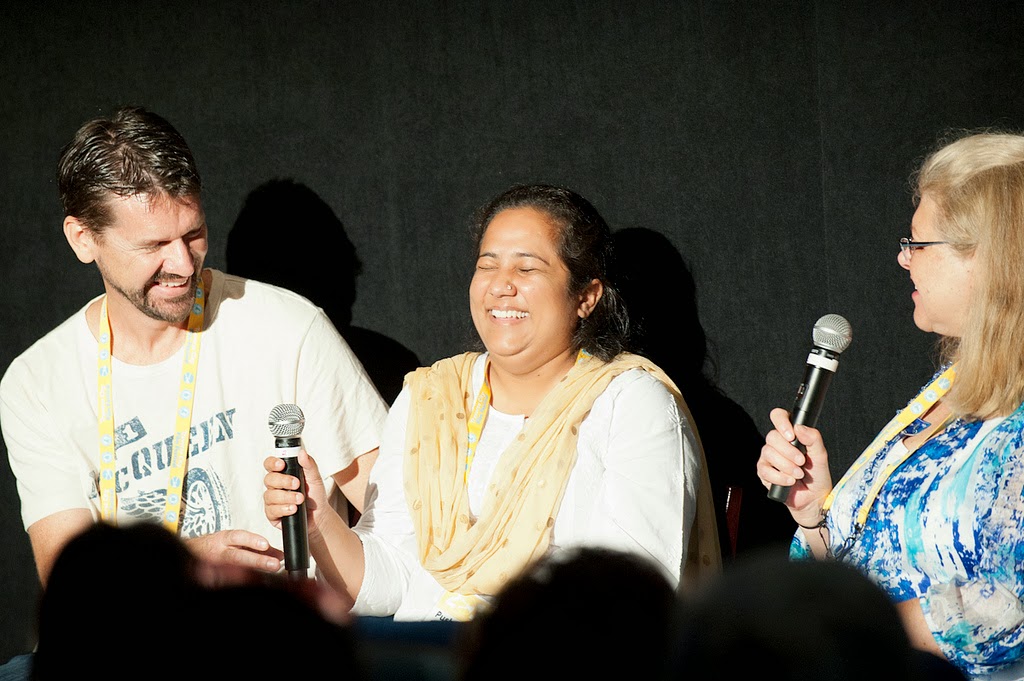 Thomas and Pushpa during a Q&A session

I talked with Thomas about how he found out about Pushpa's story, how visiting Nepal changed his life, and how all of us can make a change and help Pushpa's cause continue on and save many children's lives.

Special Thanks to Thomas Morgan for taking the time out of his incredibly busy Sundance schedule to talk about Waiting for Mamu. I highly encourage everybody to see this film and share it with your friends and neighbors. Below we have a link to the page where you can help donate to Pushpa and help change peoples lives. Thank you again Thomas! Everybody spread the word and go see Waiting for Mamu. 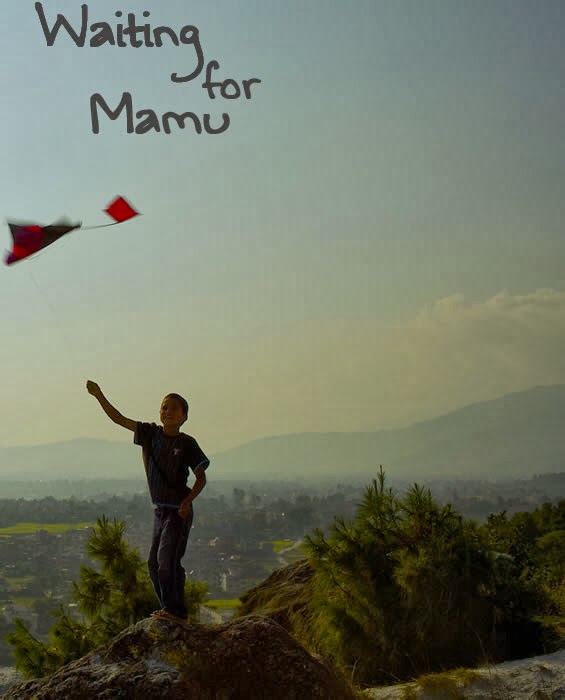 View the Official trailer for Waiting for Mamu

LISTEN TO THE INTERVIEW HERE

On this new episode of On the Mic I talked with comedian and actor, Tracy Morgan. 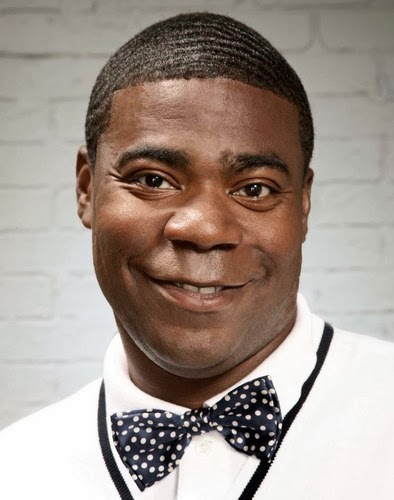 Tracy is best known for his work on 30 Rock, SNL and his countless films on the big screen. Tracy and I talked about his upcoming stand up tour, "Excuse My French", as well as what inspired him to start comedy and his book, "I Am The New Black". 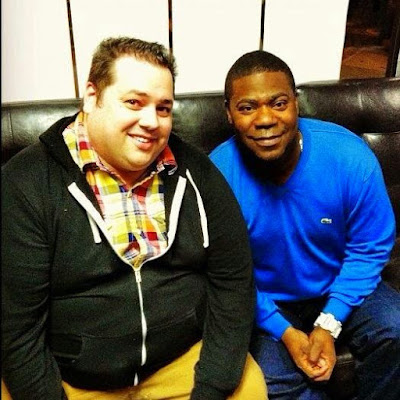 Tim and Tracy after his stand up shows

I have been a long time fan of Tracy and was thrilled to have him on the show. A special Thanks to Tracy Morgan for taking the time out of his busy schedule for this interview. 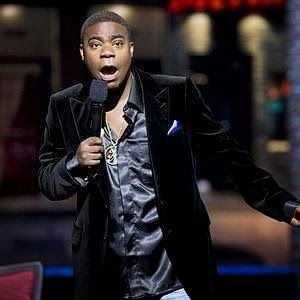 Tracy is coming to see us in Salt Lake City this week the 23-25th at Wiseguys Comedy Club. Get your tickets now before they are gone.

Enjoy this new episode of the podcast with Tracy Morgan!

BUY TRACY'S BOOK, "I AM THE NEW BLACK HERE"

LISTEN TO THE EPISODE ON PODBEAN HEREE

Posted by On the Mic Podcast at 6:20 AM No comments:

Time for another award show! This week between the Golden Globes and the SAG Awards has been filled with so much great entertainment. We had the Oscar Nominations released on Thursday, as well as The Sundance Film Festival kicking off in Park City, Utah. I'm currently writing my picks from the Wasatch Brew Pub in Park City where we have kicked off our Sundance experience filming interviews for X96. We've had a great time so far meeting a lot of great filmmakers and attending some great parties. We will post more about Sundance later this week. 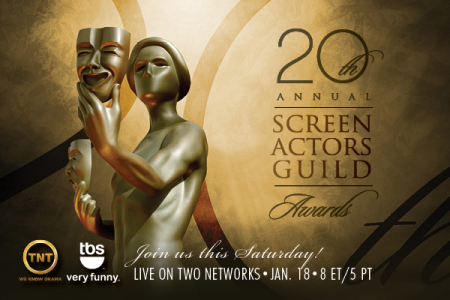 Now lets get to to my SAG Awards picks! There is so much great talent nominated, and I can't wait to see who wins. My Golden Globes picks did well, lets see if my SAG picks do a little bit better. Enjoy!

Outstanding Performance by a Female Actor in a Leading Role
CATE BLANCHETT  for  “BLUE JASMINE”
*I picked Sandra Bullock during the Golden Globes thinking that was how the Hollywood Foreign Press would vote. Honestly, in this list I don't think that she's the best. So I'm sticking with my gut this time. I could also see Emma Thompson win for Saving Mr. Banks.

Outstanding Performance by a Female Actor in a Drama Series
ANNA GUNN  for “BREAKING BAD”
*This is actually a pretty strong category. I think Claire Danes are Kerry Washington are both great contenders. However, after Anna Gunn's Emmy WIn for the role, I feel Anna Gunn is really the top contender this year for the SAG Awards. She was brilliant in the final season of Breaking Bad.

Outstanding Performance by a Male Actor in a Comedy Series
JIM PARSONS for “THE BIG BANG THEORY”
*Another really strong category. I think Ty Burrell is a big contender here as well as Don Cheadle,  but overall performance I think Jim Parsons wins. Interesting changes in this category compared to the Golden Globes last Sunday.

Outstanding Performance by a Female Actor in a Comedy Series
TINA FEY for “30 ROCK”
*This has been the hardest category to pick so far. Every one of the women nominated for this award is an incredible actress. I keep hoping to see Mayim Bialik win an award for her role as Amy on The Big Bang Theory, but I feel this category is a little too strong for her to get a win this year.

Outstanding Performance by an Ensemble in a Drama Series
BREAKING BAD

Outstanding Performance by an Ensemble in a Comedy Series
MODERN FAMILY

It's time now to tune into the 20th SAG Awards! Tune on on TBS or TNT starting at 8PM ET/5PM PT.
Congrats to all of the nominees this year!
As I continue to work on our new show The Job Interview, I look forward to joining SAG this coming year and being part of the festivities next year. Enjoy the show! I'll be watching it here at Sundance. Stay tuned for upcoming reviews, pictures, and videos from Sundance this year.
Posted by On the Mic Podcast at 5:04 PM No comments:

In this new episode I talked with comedian and writer, Seth Herzog. 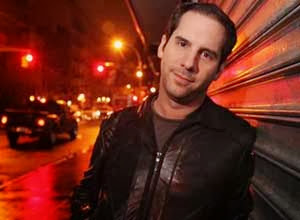 Seth is best known for his role on Late Night with Jimmy Fallon, as well as TV and movie roles on Role Models, 30 Rock, and Stella. 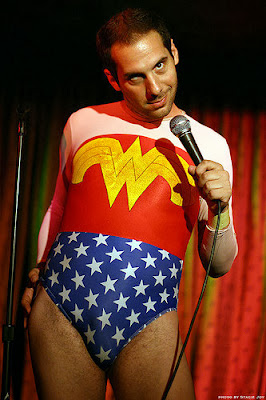 Seth as Wonder Woman during his stand up set.

I talked to Seth about Nerdist Bowling, Late Night with Jimmy Fallon, the transition to The Tonight Show, as well as his new show Duck Quacks Don't Echo starring Seth, Tom Papa, and Michael Ian Black. 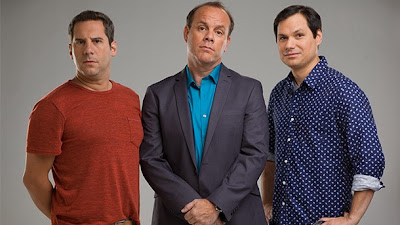 It was great to get to know a little about Seth. Check out Duck Quacks Don't Echo on Nat Geo TONIGHT at 10PM ET. Follow him on Twitter, and catch him on Late Night with Jimmy Fallon. Thanks for joining me on the show, Seth!

Check out the episode of All-Star Celebrity Bowling that Seth and I talk about in this episode.

Posted by On the Mic Podcast at 7:47 PM No comments:

Awards season is officially here! This is one of my favorite times of the year. There have been so many great films, incredible TV shows, and amazing acting performances this past year. I've been looking forward to the Golden Globes this year mainly to watch Tina Fey and Amy Pohler host the show again.   They were absolutely brilliant last year!

Making my award show picks has started to become a tradition for my sites, so I knew we had to do it again this year. Without further adieu, here are my picks for the 71st Annual Golden Globe Awards.

I could also see this go to Chiwetel Ejiofor for 12 Years A Slave, but I think McConaughey nailed it this year.

Sadly I haven't had a chance to see "Her" yet. I've heard a lot of great things about it, but I can't pick it without seeing it.

Best Actress in a Motion Picture, Musical or Comedy

Best Actor in a Motion Picture, Musical or Comedy

Tough category! Bale could easily win, and so could DiCaprio. However, I think Oscar Isaac was incredible in this film and he deserves the award.

Blue is the Warmest Color

Taking a stab in the dark here since this was the only film in this category that I was able to see.

Alex Ebert, All is Lost

Best Actress in a TV Series, Musical or Comedy

Best Actor in a TV Series, Musical or Comedy

This category should have been a lot stronger than it was. All of them are great actors, but there were a lot of better performances than those that were nominated.

Best Actress in a TV Movie or Mini-Series

Elisabeth Moss, Top of the Lake

Best Actor in a TV Movie or Mini-Series

Michael Douglas, Behind the Candelabra

Best Supporting Actress in a TV Movie or Mini-Series

I honestly have no idea. The only one of these actress I have watched in the shows they are nominated for is Sofia Vergara, and it's not going to be her. I've heard buzz around Bissett, so that's why I've made the pick.

Best Supporting Actor in a TV Movie or Mini-Series

Well, there are my picks! Lets see how I do this year. I will have more picks later this week for the SAG Awards.

Posted by On the Mic Podcast at 6:43 AM No comments: