The 2017 Emmy Awards are here! This year's show is hosted by one of our favorite comedians and late night hosts, Stephen Colbert. 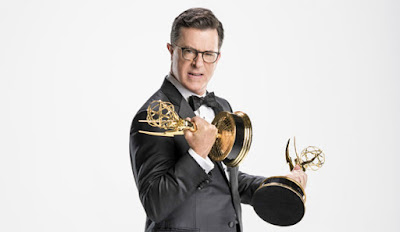 It's become a tradition at On the Mic for me to make my award show picks. This year's Emmys may be the hardest year I've made picks for. So many of my favorite shows, and favorite actors are going head to head. It makes it hard to pick when they're all your favorites. But the picks must be done! So without further adieu, here are my 2017 Emmy Picks!

Drama Series
“This Is Us”
One of the hardest categories to have to pick a winner. "This Is Us" seems to be the frontrunner to me, but don't count out "Stranger Things", or with a twist, "The Handmaiden's Tale".

Comedy Series
“Atlanta” (FX)
A lot of people think "Veep" is the lock here, but I think we will see "Atlanta" take an Emmy home for their first season. Also don't count out "Master Of None". Season 2 was spectacular.


Comedy Actor
Donald Glover (“Atlanta”)
So many great actors, but this is Donald's time!

Supporting Actor in a Drama Series
John Lithgow (“The Crown”)
I love seeing Jonathan Banks nominated every year. One of these years he will take it!

Supporting Actress in a Drama Series
Thandie Newton (“Westworld”)
Crissy Metz is close on Thandie's heals for her role in "This Is Us". Don't be surpised to see her take the win. I also think Uzo Aduba is making this a really tight race. She was incredible on "Orange Is The New Black" this last season.


Supporting Actress in a Comedy Series
Kate McKinnon (“Saturday Night Live”)
I love every one of these women and the incredible roles they've brought to life. This one is going to Kate though. I sure would love to see Leslie Jones take it home though.


Variety Talk Series
“The Late Show with Stephen Colbert”
I would love to see Samatha Bee take this home, but Colbert has been on a role, and topping the ratings! I also wouldn't count out Corden. I want all of these shows to win!


Variety Sketch Series
“Saturday Night Live” (NBC)
SNL was brilliant this year! But who wouldn't love to see "Billy On The Street" take this one home?


Writing for a Drama Series
The Duffer Brothers (“Stranger Things”)


Writing for a Variety Series
“Saturday Night Live"
This is honestly one of my personal favorite categories since these guys all of the job I want. I could see any one of them winning, but I don't think the beast that is SNL is going to slow down.

Tune into the Emmys TONIGHT on CBS starting at 8PM EST. We can't wait to see what Colbert has in store.
Posted by On the Mic Podcast at 3:51 PM