Lance on the Moon

(Formerly published on Tim's pervious podcast, My House on the Moon)

After his confession filled interview with Oprah, our dear friend Lance Armstrong needed a place to lay low until everything calmed down. Naturally, he called us knowing that we wouldn't judge him, and we would love to have him visit. We offered to send him a Space Pod for his journey up, but he said that wouldn't be necessary. According to Lance, "Let me just grab some juice and my bike and I'll be there in an hour." I don't know how he does it! I drink 3 glasses of Orange Juice everyday and it still takes me 12 hours to get back and forth to Earth by Pod. It would take me at least a month by bike. He truly is an exceptional athlete! I'll have to find out what kind of juice he's been drinking. He must have one of those Jack LaLanne juicers or something to keep him juiced.

Since I head Lance was on a juice diet, I bought a ton of fruit juices and V8 for him. He hasn't touched one of them yet! A little rude of our house guest if you ask me. I'm a little concerned about his health though. He hasn't left his room much except for the occasional bike ride around the Moon. While I was tiding up around the place, I found a few syringes rolling out from his door. This was quite the alarming discovery. I hope he doesn't have diabetes now. Livestrong, Lance! Livestrong! 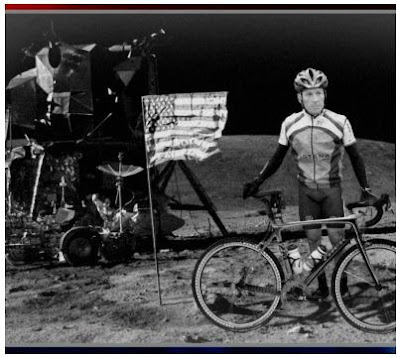 (photo courtesy of the Colbert Report)

I hope your stay in our Moon home is comfortable enough for you, Lance. Just make sure to wipe your tires off before bringing your bike back in the house. The Moon dust is worse than glitter! Once we get it inside the house, it's here for months. I am still finding Moon dust from the last time Jordan forgot to wipe his feet thoroughly. That was in October 2009!

Stay as long as you would like, Lance. We will let you know when everything has calmed down and your hit man has finally taken out Oprah.

I wonder if we can officially start the Tour de Lunar now? I've always wanted to be in a bike race! Time to break out my Big Wheel! Bring it Lance!