Jimmy Kimmel to host the 2017 Oscars!

The Academy of Motion Picture Arts and Sciences announced that Jimmy Kimmel will be hosting the 2017 Academy Awards! 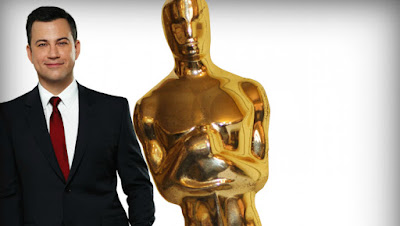 It's no secret that all of us at On the Mic are big fans of Kimmel, and we are really looking forward to seeing what Jimmy brings to the Oscars. I'm going to be selfish and hope that Kimmel also still manages to do his After the Oscars show, but it may prove difficult to do both with his Oscar duties. Either way, we're excited to see Jimmy host the show.

The Oscars will take place Sunday, February 26, 2017 at the Dolby Theatre in Hollywood. Read the Academy's Official Press Release below.

LOS ANGELES, CA –Late-night talk show host, producer and comedian Jimmy Kimmel confirmed on “Jimmy Kimmel Live!” that he will host the 89th Oscars® to be broadcast live on Oscar® Sunday, February 26, 2017, on the ABC Television Network. This is Kimmel’s first time hosting the global telecast.

“Mike and Jennifer have an excellent plan and their enthusiasm is infectious,” said Kimmel. “I am honored to have been chosen to host the 89th and final Oscars.”

“Jimmy’s ability to connect with people is what makes him a singular choice for this job,” said producers Michael De Luca and Jennifer Todd. “His frank observations, relatable persona, wry humor and love of all kinds of film make him a natural fit for the Oscars stage.”

“Jimmy has the qualities of all the great hosts,” said Academy President Cheryl Boone Isaacs. “He knows who he is, he knows the audience and he knows how to captain a ship with many moving parts. We're thrilled he has agreed to host our show.”

“The Oscars are in great hands with Jimmy,” said Academy CEO Dawn Hudson. “He is razor sharp, funny, and unpredictable, and has proven himself a master of live event television, which is perfect for our audience around the world.”

Channing Dungey, President ABC Entertainment said, “Jimmy is the perfect choice for us. He is deeply rooted in the Hollywood community and gifted at connecting with an audience as the consummate emcee. We expect the evening will be filled with great fun while honoring the best in the movie business.”

Kimmel serves as host and executive producer of the Emmy®-winning “Jimmy Kimmel Live!,” ABC’s longest running late-night talk show. Now in its 14th season, “JKL” has earned six Emmy nominations in the Outstanding Variety Series Talk category, the Writing for a Variety Series category, and the Variety, Music or Comedy Series category.
Posted by On the Mic Podcast at 12:30 PM