After a crazy year of unpredictability with film releases and theater survival, today we celebrate the films that were released with the 93rd Annual Oscars! 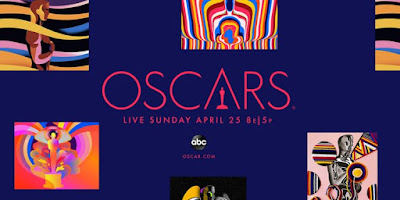 This year's ceremony was pushed back from it's usual February/March dates in hopes of being able to safely hold an in person ceremony. Through the hard work of The Academy, and of course the result of the vaccines, they were able to put together a safe ceremony. This year's ceremony will still look different, taking place in multiple locations aside from The Dolby Theater, including Union Station in Downtown Los Angeles and London. Some of the musical performances will be taking place from all around the globe, including the new Dolby Terrace at the soon to open Academy Museum, all the way to Husavik, Iceland.

Some have said that this years Oscars should carry an asterisk due to the different circumstances of film distribution and viewing in 2020, but that notion is honestly just stupid. This year's nominees and the nominated films have told stories and accomplished just as much, if not more than plenty of films in the past. Several of this years nominees far exceeded the expectations I had for them. With all of that being said, here are my picks for this years nominees. Don't miss the Oscars at 5PM PT on ABC.

Best Picture
"Nomadland"
Actor in a Leading Role
Chadwick Boseman
Actor in a Supporting Role
Daniel Kaluuya
The moment I watched Judas and the Black Messiah at Sundance I knew Daniel Kaluuya was taking home the Oscar. I didn't expect him to be in the supporting category, but I guess Warner Brothers wanted to make sure he took it home.
Actress in a Leading Role
Frances McDormand
Actress in a Supporting Role
Yuh-Jung Youn
Yuh-Jung Youn was absolutely brilliant in "Minari". Don't count out Maria Bakalova for "Borat", but it seems as though Yuh-Jung Youn has this locked down.
Best Animated Feature
"Soul"
"Soul" is in a league of their own here. While all of these films were excellent, "Soul" absolutely blew me away.
Cinematography
“Nomadland”
Honestly, how in the world was "Minari" not nominated for Cinematography? It was brilliant.
Costume Design
“Ma Rainey’s Black Bottom”
"Mank" isn't going to win much, if anything tonight, but this is one category they could sneak in a win.
Directing
Chloé Zhao - "Nomadland"
Documentary Feature
“My Octopus Teacher”
I would absolutely love to see "Crip Camp" win here as well
Documentary Short
“A Concerto Is a Conversation”
Film Editing
“Sound of Metal”
While "Sound of Metal" has the edge here, this could very well go to Chloe Zhao for "Nomadland".
International Feature
“Another Round” - Denmark
Makeup and Hairstyling
“Ma Rainey’s Black Bottom”
Original score
“Soul” - Trent Reznor, Atticus Ross and Jon Batiste
I will love to see Trent Reznor and Atticus Ross win again, but I'm even more excited at the hope of seeing Jon Batiste getting an Oscar.
Original song
“Speak Now” from “One Night in Miami...”
Some believe that "Husavik" from "Eurovision Song Contest" could win here, but I was honestly surprised to see it nominated. I think Leslie Odom Jr. is going home with the Oscar for "Speak Now".
Production Design
“Mank”
Here's is "Manks" one and only win tonight.
Animated Short Film
“Burrow”
Don't count out “If Anything Happens I Love You” to sneak in and win here.
Live Action Short Film
“Two Distant Strangers”
Sound
“Sound of Metal”
Visual Effects
“Tenet”
Adapted Screenplay
Chole Zhao - "Nomadland"
Original Screenplay
Emerald Fennell - "Promising Young Woman"
If Emerald doesn't win this, I would love to see it go to Lee Isaac Chong for "Minari" or Kemp Power for "One Night in Miami".
Don't miss this year's Oscars at 5PM PT on ABC!
Posted by On the Mic Podcast at 3:42 PM