Awards Season is officially here! The Golden Globes are LIVE on NBC tonight hosted once again by the hilarious Ricky Gervais! It's become a tradition at On the Mic, that we put in our picks for who we think will take home the prestigious Golden Globe Award. 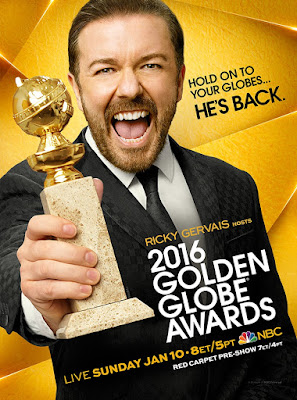 One of my favorite things about making my annual picks are the hours spent watching screeners and going to the theatre to make sure I see every film and TV show nominated for an award.

Congratulations to all of the nominees this year. It's always hard to pick against some of my favorite actors and actresses, as well as favorite films and TV shows, but it had to be done. All of that being said, here are my picks for the 2016 73rd Annual Golden Globe Awards.

(I was absolutely torn on this category between Spotlight and Mad Max. If Spotlight doesn't win, it will go to Mad Max)

(Another tough pick for me. This could very easily go to George Miller for Mad Max, but I really feel that this is Ridley Scott's year)

(Christian Bale is excellent in The Big Short and was the one person I was slightly torn on, but this is Matt Damon's year.)

(This has been the year of Schumer! I think Amy Schumer has this one in the bag. I couldn't be happier to see Schumer getting more and more recognition for her incredible talent.)

(What for Michael Shannon as well in this category, but I think Stallone has this one in the bag)

(Don't count out Alicia Vikander for Ex-Machina. She's absolutely brilliant in this film as well as The Danish Girl. Alicia Vikander is going to become more and more of a household name and very easily could take home the Golden Globe tonight)

(Tough choice against a few of the other films, especially The Hateful Eight. The Oscars will make this category a little easier to pick when the screenplays are separated by Adapted and Original. For the Globes, this goes to The Big Short.)

Best Animated Feature Film
Inside Out

(I think Transparent will pick up another win this year, but I am really rooting for Silicon Valley to upset them all and take this one home)

(I wouldn't be surprised to see this go to Jon Hamm, but the Golden Globes enjoy young, new talent, and Rami Malek is everything they love.)

(I could see this go to Christian Slater as well for Mr. Robot, but with all of the attention behind Bloodline, I think Ben Mendelsohn has this one)

Let's see how I do this year. Of all the award shows, I always feel like the Golden Globes are the hardest to pick. Follow along on Twitter as I live-tweet the Awards @timdrake