Award Season is officialy upon us as the 77th Annual Golden Globe Awards take place TONIGHT at the Beverly Hilton. This year's show is hosted once again by comedian Ricky Gervais. 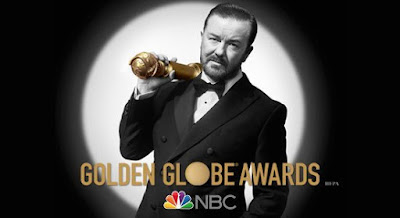 As I mention every year, the Golden Globes are probably the most difficuly awards to try and predict. The Hollywood Foreign Press does show a lot of patterns with how they seem to vote for the Golden Globes, but even then they love to throw some curve balls at us.

So many of this year's categories are stacked with such incredible performances that I don't know how anybody could possibly pick who to vote for. I've spent a lot of time (that I probably should've been working) watching hours of these films and TV shows. Some I loved, some I couldn've done without, but even those I wasn't the biggest fan of doesn't mean they were bad. It simply means they weren't for me. There's so many great works of art throughout this years nominees that I hope you get a chance to see them all. Here are my predictions for this year's Golden Globe Awards.

This will be the first category people will read and be angry with me not picking "The Joker". However when it comes to the Hollywood Foreign Press, they love Scorcese. I would be surprised to see something else win here.

I wouldn't count out Adam Driver here. It's no secret that I'm not much of a fan of Joaquin Phoenix, and a lot of that comes from his attitude towards people. I think he's a brilliant actor, but I've seen and heard enough that I can do without him. I think hype is what potentially carries him to this win, but Adam Driver has been very open with the HFPA while doing the double press tour for Marriage Story and Star Wars.

“Once Upon a Time in Hollywood” (Sony)

Best Actress in a Motion Picture – Musical or Comedy

Watch for the possible upset from Beanie Feldstein, but I think Awkwafina has this on lockdown. People have been talking about her performance in "The Farewell" since this premiered at Sundance last year. This is her time. Beanie will eventually get hers though, just not this year. But damn she was great in "Booksmart"!

Best Actor in a Motion Picture – Musical or Comedy

Eddie Murphy (“Dolemite Is My Name”)

Best Actress in a Supporting Role in Any Motion Picture

Best Actor in a Supporting Role in Any Motion Picture

Quentin Tarantino (“Once Upon a Time in Hollywood”)

Look, I know the HFPA will most likely pick "The Crown". It's a fine show with great performances. But in a TV Drama I like a show that keeps me on the edge of my seat and can also make me laugh. That's what "Succession" does. If I need a nap I'll try and finish the last season of "The Crown".

Best Performance by an Actress in a Television Series – Drama

Best Performance by an Actor in a Television Series – Drama

I would love to see Ben Platt win here for "The Politician", but after Hader lost last year, I think it's time for the HFPA to finally give him some love for one of the best shows of the year.

Best Television Limited Series or Motion Picture Made for Television

Don't be surprised if "Unbelievable" wins. Oh, you've never heard of "Unbelievable" before until this very moment and "Chernobyl" crushed at the Emmy's. Well that's basically dirty talk for the HFPA if past winners have taught us anything. But "Chernobyl" dominated the Emmy's for a reason. It was incredible. It should win.

Don't count out Helen Miren here, but Michelle Williams won this Emmy and I think the Globe is hers as well.

Best Performance by an Actress in a Supporting Role in a Series, Limited Series or Motion Picture Made for Television

Best Performance by an Actor in a Supporting Role in a Series, Limited Series or Motion Picture Made for Television