Awards Season is officially here! The Golden Globes starting in a few hours just down the road from us at the Beverly Hilton. One of our favorite late night hosts, Seth Meyers, is taking the reigns as host tonight, and we can't wait to see what he has planned! 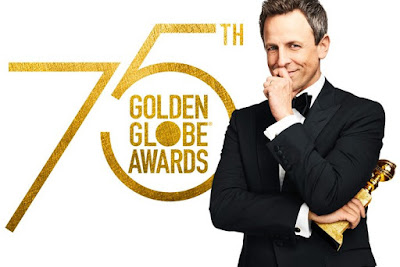 While this year's awards have some incredible nominees, I still can't get over the snubs for "The Big Sick" and Jordan Peele for "Get Out". Hopefully the Oscar nominations will right these wrongs in a few weeks here. As tradition holds, it's time for me to make my annual picks for the Golden Globe winners. I always feel like the Golden Globes are the hardest to pick. The Hollywood Foreign Press always seems to have far different taste than most of us making picks. While "The Shape Of Water" has 7 nominations, I really don't see it winning anything. I really do not understand the hype of the film. Without further aideu, here are my picks for this year's awards.


Best Motion Picture, Drama
Call Me by Your Name

Best Animated Feature Film
Coco
How the hell did "Boss Baby" really get a nomination? To put "Boss Baby" at the same caliber of film as "Coco" is just laughable.

Best Director – Motion Picture
Christopher Nolan, Dunkirk
"Dunkirk" was a directing masterpiece. I know a lot of people think that Guillermo will take this for "The Shape Of Water", but I don't think there was anything special about the Directing of the film. It was simplistic and nothing compared to the overall scope of Guillermo's work.

Best Screenplay – Motion Picture
Greta Gerwig, Lady Bird
The only other possibly I forsee is Martin McDonagh for "Three Billboards", but this should have been a nomination for "The Big Sick".

Best Actor in a Motion Picture, Drama
Timothée Chalamet, Call Me by Your Name

This break out role for Timothee Chalamet will be a defning one in his career. While the others gave great performances, Timothee also had a great performance in "Lady Bird" that is going to sway voters as well.

Let's hope James accepts the award in character as Tommy.

Best Supporting Actor in a Motion Picture
Christopher Plummer, All the Money in the World

I know a lot of people may be suprised by this pick, but don't forget that Plumber did this entire film in 9 days and still managed to get a Golden Globe nomination! Don't count out Sam Rockwell for "Three Billboards" or Willem Dafoe for "The Florida Project", but I think Plumber will suprise everybody.

Best Supporting Actress in a Motion Picture
Allison Janney, I, Tonya
Laurie Metcalf could easily come in and win this as well for her role in "Lady Bird", but I think we see Allison Janney take this one home.

Best Original Song – Motion Picture
"This Is Me," The Greatest Showman

After their win at The Emmy's, I don't see how they don't take this one home.

Best Actor in a TV Series, Drama
Sterling K. Brown, This Is Us

Best Actor in a TV Series, Comedy
Aziz Ansari, Master of None

Best Actor in a Limited-Series or TV Movie
Jude Law, The Young Pope

Best Supporting Actress in a Series, Limited-Series, or TV Movie
Laura Dern, Big Little Lies
Posted by On the Mic Podcast at 4:47 PM