During my time in Los Angeles, I had the fantastic opportunity to attend the premier of a new movie called Short Term 12. I was invited to the Academy's Pickford Center for the screening with the cast and director, Destin Creeton. Destin won the Academy Nichol Fellowship for his screenplay of Short Term 12, and was able to make his dream a reality. 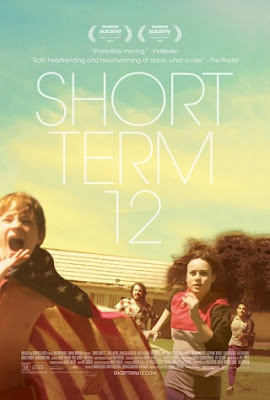 While I've made my picks on various awards shows and discussed a few movies on our show, I've never written a movie review for the website. Short Term 12 inspired me to finally write a review. Being a young filmmaker myself, this film really spoke to me. It is such a beautiful film from start to finish.

Short Term 12 is a story about a girl named Grace, who is a supervisor at a troubled foster home that encounters many struggles while also working alongside her boyfriend, Mason. The lead roles of Grace and Mason are played by Brie Larson (Scott Pilgrim, The Spectacular Now) and John Gallagher Jr. (The Newsroom).

The entire casts performance is absolutely amazing. You can truly feel the struggles and emotions that every character is going through. As the troubled teens in the home are introduced to you, you are able to gain an intimate bond with them and their struggles. One of the teens, Marcus, played by Keith Stanfield, really lets you into his life and troubles. You feel for everything he goes through. Some of the most powerful scenes of the movie feature the emotions of Marcus. There is one scene where he does a freestyle rap accompanied by Gallagher's character. The song is absolutely incredible. It helps bring you in deeper to the bond that Marcus and Mason have in the home, as well as the deep emotions Marcus is struggling with.

The character of Jayden, played by Kaitlyn Dever (Last Man Standing, Justified, J. Edgar) is a very troubled teen brought to the home at her fathers request. Grace does all that she can to try and help Jayden, even though she doesn't want the help. The struggle to build a relationship between Grace and Jayden is a powerful and emotional trip as Grace discovers parts of her life are not far from the struggles of Jayden's life.

While the struggles and stress of work continue to pile up on Grace and Mason, they still have to find a way to make their relationship work as well.

While Short Term 12 is an emotional roller coaster, you will be thrilled you were along for the ride. I would easily give Short Term 12 a 4 star rating. This is the must see film of the year! I will not be the least bit surprised to see Short Term 12 take some Oscar nominations this year.  Get out and support this film. Support young filmmakers, as they are the filmmakers of tomorrow. This is just the start of Destin Creeton's career. Creeton is off to a smashing start and I expect we are all going to get to know Creeton very well for many, many years to come.

Short Term 12 is Rated R for language and brief sexuality.

While writing this review, I have learned the Short Term 12 currently holds a 99% rating on Rotten Tomatoes, being one of the highest rated film of the year!