James Corden and Denis Leary donned their wigs and pant suits as Bill and Hillary Clinton for a rendition of Leary's song, "Asshole". The performance on Wednesday's "The Late Late Show" took aim at the Republican front runner, and bloated Oompa Loompa scrotum, Donald Trump. 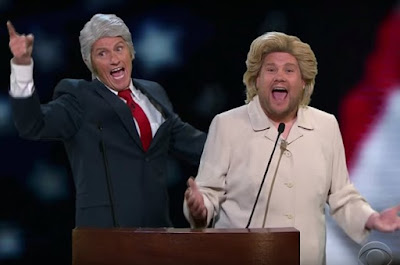 Corden and Leary took went after Trump's politically-incorrect and extreme policies in the song, with the chorus reminding us, "Trump's an asshole, he's an asshole, what an asshole".

Enjoy the video from "The Late Late Show with James Corden" below.